So many you to choose
So many you to know
So many you to admire
So many you to grow
The you that rises so early,
to make herself all pearly
The you that breezes the city
and makes hard work look so easy
The you that decorates, stays tidy
and keeps things so straight.
The you that wears things sassy
but keeps it all so classy.
The you that creates words of feeling,
and pushes poetry’s ceiling.
The you that brushes canvas,
and gives your soul’s color new compass.
The you that senses, sees, shoots,
and gives film unimagined roots.
The you that records ever word of every song ever heard.
The you that is there, gives much care.
while others just stare.
The you that plays, nurtures & defends,
one of man’s best friends.
The you that rolls and jams,
showing of one of the world’s toughest lambs.
There are more yous in you than there are minutes in a day.
There are more yous in you than this poem can’t help to convery.
With you, one is never bored with things to say.
You make art of yourself in every possible way.
My favorite you?
How can I pick?
Me choosing a favorite is almost sick.
Maybe the best is yet to be done.
But if I must, there is just this one.
Its my pet favorite and my secret crush.
The one I caught glimpses of and made my love blush.
Now and then I could conjure it with a joke.
Or if I said something wry.
When this you came it was so revealing and unshy.
All that was kempt, came unkempt,
and it would let fly.
High walls tumbled, muscles unrumpled,
and blood filled up.
From deep inside you this beautiful sound,
began to go eruptible.
Joyous noise completion and vibration uncorruptible.
Jarring was its witness.
But seductive none the subtle
Head rearing back, eyes gleaming lightning beams.
Tears welling up
Champagne bottles shooting streams.
Cheeks filling peak for the coming shrieks.
Lips slivering long, delivery ready,
for your heart’s song.
When it sprung on the air, it surrounded me,
and spun me like a top.
But so delicious to hear I never wanted it to stop.
When I felt of its causation?
I never felt such glad sensation!
I’d done something well in your heart’s nation.
Your body in perfection.
Your soul’s music a vexation.
Your spirit in its truest,
and suddenly on vacation.
Your laugh…
You. Laughing.
This is my favorite you.

In 2005 I was invited to read for film about vampyres. I didn’t care much about them or for them, but the film paid, had some talented people involved, and after a test kiss with my female co-star, Tara Rinko who had stunning eyes, I was in for the 12 weeks of shooting. It also conincided strangely with my own time spent with a vampyre house, which was more like a group of tragically deluded children. I’ll write about them at a later date as they were a true, sanguine, or blood drinking house (I did not participate). The film became a strange allegory for my own life and sorting out its demons. I was always a person tortured by lusts and passions and it was only until shooting the film that I realized this was the crux of the vampyre personality and all the more reason it was in my life as a project. I was confronting my own darknesses and torments. We filmed this in an unoccupied house in downtown Savannah, a strip club called The Gold Club, along with Bonaventure Cemetery. My life ran a regular pattern for those 12 weeks. I would film the vampyre film all day, doing one or two ghost tours, then go back to the set to do more filming. It was like while confronting my own demons, while making art, I was becoming even more like a vampyre in my own life.

The story is basically about Francis the vampyre who has been alive since The Civil War, if not before, and long before the 21st century, he had lost his lover, Bathory to the war itself. After a century and more for searching for her, he finds her working at a modern day strip club, although its from sketching her in a random way, that he begins to realize this is indeed Bathory. He becomes decided in his mission to seduce and kidnap her, realizing that she is not “awake” to her former self and that he must resurrect her unconscious vampyre mind to once more join him in their journey. She eventually does, but only after staking him in the heart (Spoiler Alert!) and he dies in her arms. Strangely, but I could relate to that actually.

One interesting character note was that instead of having my character sleeping in a coffin, they decide to use a bed that I own that is made entirely of cemetery gates from Laurel Grove Cemetery here in Savannah. The gates probably date from the 1850s but the “headboard,” are these arching acanthus vines that would have been the entrance arch to a family plot and then the “footboard” is part of the fence from the plot with running boards coming from another part of the fence’s original foundation. The bed once reposed insde of the Hamilton-Turner House of Savannah and believe it or not, was in their wedding suite! Oddly its the only time the bed was really used by me or since and is just sitting in my garage in pieces. For a time, I had it on disply in my house for ghost tours and you can see it there in the photograph in this article in a picture that was taken for ESQUIRE Japan. That’s also my dog Mina in the bed with me who ironically, I named for Wynona Ryder’s character in the film “Bram Stoker’s DRACULA.” And she was my Mina for 16 years passing on in 2007.

The Victorian House in the middle of summer was beastly hot which to some degree was fine as I knew I would be doing a sex scene and that I wanted to lose some weight before filming it. The day we shot the sex scene was beyond surreal and interesting. Probably 10 crew members in a tiny little room, all hovering around the bed, camera lights and a rather larger 35MM film camera with crane, creening down and hovering over the action. Not trying to sound too cheeky but it did give you some empathy for your every day erotic film players. I’m pretty sure we spent somewhere around 8 hours or more, filming that scene. I had decided that since I was a regular walk-around-the-house-in-the-buff type, and frequently sunbathed in the nude, that I was going to take the whole thing in stride. I just pretty much walked around in ala birthday suit and did the scene unapologetically. You pretty much have to either cast any doubt to the winds or as I did, I just told myself, “Man, you look GOOD.” And I did so there. Plus my sexy costar made it easy and I was actually shocked, but she was much more nervous than I and at times it was really tough for her to be the object of focus. Thankfully there were some libations on the set that day!

So that’s that really. The 21 minute film, which is not on video, but actually shot on 35mm celluloid, was a fun little project. It showed at the one of the Savannah College of Art & Design Film Festival events and funny, but at one of the after parties where the crowd was dominated by many Spanish girls, I got recognized and they all kept saying suspiciously, “Vampiro! Vampiro!” Sadly, they did not ask for my autograph, nor a date. I believe the test film later sold in Hollyweird for a bigger project but do not believe that it was or has been made into a longer film. I had lots of fun doing it and learned a lot about myself too. It became part of the story of self, and shaking off my spiritual darkness and am glad I have the memory… 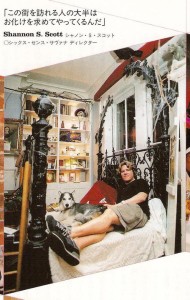