Imagine scurrying off to war at 11 years of age and only allowed in because you cheated your own last name and looked 14? And leaving your childhood behind forever for the adventure most men even feared? You had no concept of a telephone or electricity let alone the world at large! Or war! But how the memory of all, including shaking the hands of both General Robert E. Lee and General Beauregard must have been some of his fondest as he grew old. Just something about Little Drummer Boys we’d garner to say. And that is what Whitemarsh H. MacFeeley would become for a South Carolina unit long before he was buried in Savannah at 67 years of age in 1920. But the road to discovering when exactly he was born or died or whether he himself really knew his own actual age has been part of the research fun! We hope you enjoy this video!

Sublimely beautiful the scene!
And as I gaze around
I feel that nature hath proclaimed
It consecrated ground.

No rite of man, hath allowed it
But Time – who summons all
To wear the emblems of his power
And answer at his call.

These noble Oaks whose hundred arms
Are stretching wide and high;
(As if the very trees aspired
to reach the glorious sky;)

Even these are shrouded with veil
By nature lent to time;
The long grey overhanging moss
Which marks the southern clime;

O’er stately trunk and branch ‘tis threwn—
But still the bright green leaves,
Like youthful beauty, peeping through,
Seem laughing at the wreaths.

And there the ruined garden walks
Of other days declare,
And the deserted tomb-stone tells
Of valued friends that were.

The world, its follies, and its noise
To solemn thoughts give way—
We feel the power of Nature’s God,
In his sublime array –

Farewell: tho’other scenes I love,
Where nature’s beauties shine;
The tribute of my heart must be,
Thine, Bonaventure, thine!!

My good friend and fellow storyteller and author of the book, “Savannah Spirits,” Louis Clausi, came across this Bonaventure poem published in the April 8, 1833 edition of The Georgian, a now very defunct newspaper.  He was perusing the fascinating and wonderful Library of Congress website Library of Congress Newspaper Search using various key words and came across it. Special thanks to them obviously! Truth-be-told I have been sitting on it for months but alas, so goes the life of a storyist with random snippets of history scattered about both in my home and on my laptops various!

I am not entirely sure how “known” this poem has been in the current sense of historians collecting things so only use the word “Discovered” in the title to draw attention to it and not to say we’re the first to really discover it. I’ve seen a lot of literature on Bonaventure Cemetery but have never personally seen a poem written about Bonaventure before it was officially a full time operating cemetery. So yes, “its NEW to me!” And I’ll gamble, “new” to many others also.

The poem, presumably titled “BONAVENTURE,” written by a mysterious signer, “M.E.C.” does indeed pre-date Bonaventure Cemetery as an actual business entity coming into play later in 1846.  And hence why he or she in this poem is observed waxing more about the natural beauty of the fauna and foliage versus monuments, not unlike later writers John Muir and Oscar Wilde who in their Bonaventure Cemetery devotions would similarly comment. This leaves me to believe that our traveler, M.E.C., was walking around Bonaventure Plantation (c.1754), and when he refers to “deserted tombstones,” he’s referring to the founder’s plot of The Tattnall family just off of what is now Colonial Garden. It contains some of the oldest burials, including that of Harriett Fenwick Tattnall (c.1802), which is considered “the oldest in-ground burial.” However M.E.C. does not specify their name or where he finds these headstones. So although its fair to say that The Tattnall ones would be the most evident in the 1833 overgrowth, might he have seen others that have gone lost or belonged to other burial situations? Perhaps those of the French Navy who buried some 800 men in a mass grave during the Siege of Savannah conflict of 1779? Did they have a few markers set down? Its unlikely but can we say with assurances that there were positively none? Its an interesting question I think. And having been a plantation that once stretched from what is now the main cemetery entrance to the State of Florida, might he have seen gravestones of former workers, staff or slaves? Although M.E.C. does not specify, much has been lost at Bonaventure, including over half of the records from fire and flood. And having been a groundskeeper myself and one who daily sees the “handiwork” of others even now? I can tell you that as solid as some headstones are? Many break easily, fall into quick negligence if there is no family to rescue them or notice they are gone. The life of a headstone is generally bleak to be frank so I wonder about these monuments M.E.C. is mentioning. Suffice to say however, that for a poet, M.E.C. probably suggesting The Tattnall stones as “the founder’s,” they were the best known and probably easiest to encounter for let’s say any fans of his poem, BONAVENTURE. 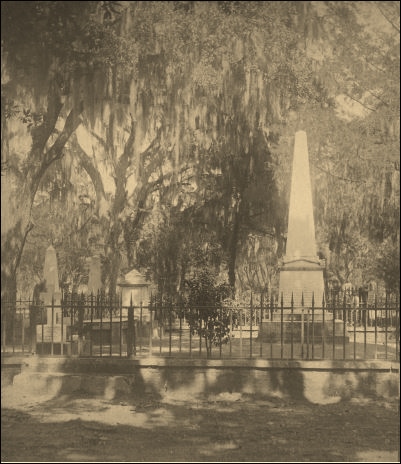 All the same, it points to a Pre-Cemetery era and even decades before, when we know that the word “Bonaventure” was a household name in America and in Europe and much more so than people realize in the current sense of her new found fame. Individuals like M.E.C. were some of the earliest fans showing the love that became a spiritual part of everything the place is today. Kudos M.E.C. whoever you were. Not a half bad poem if I do say so myself. 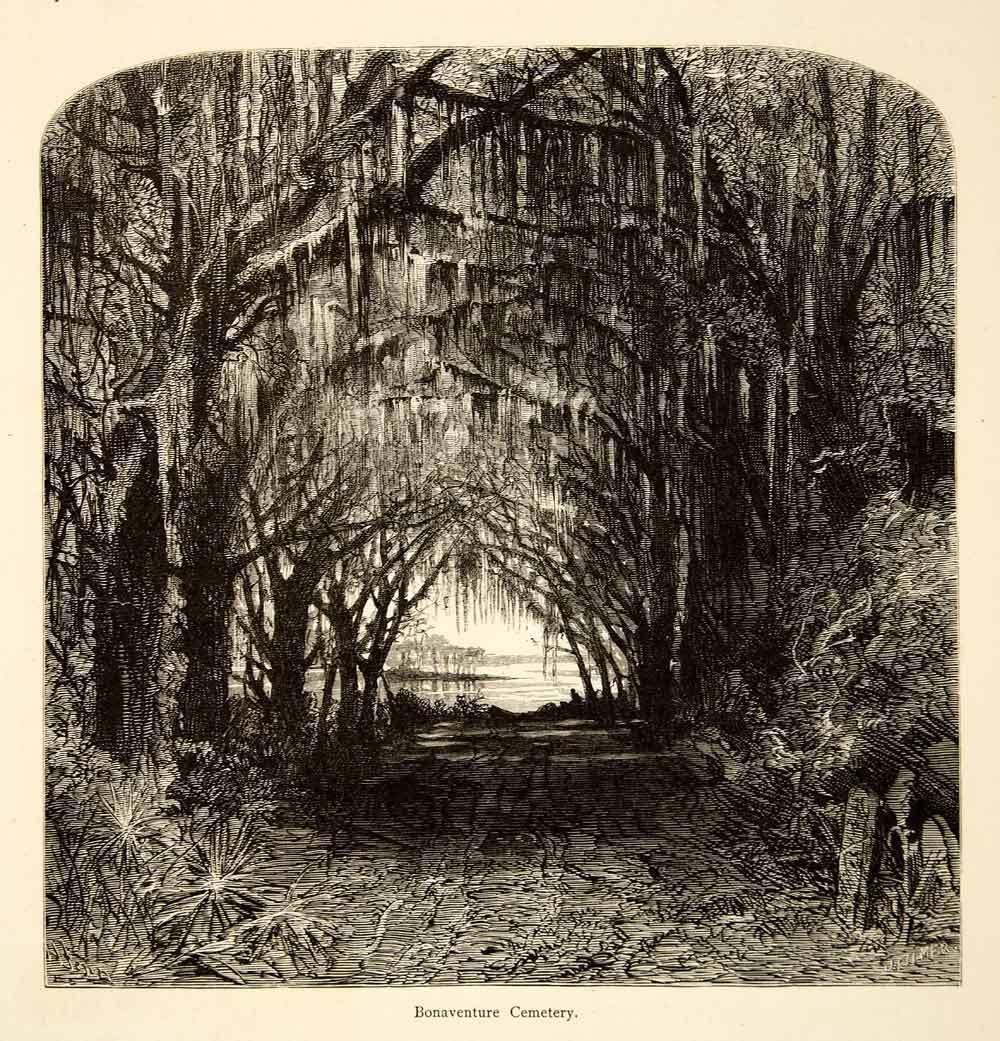 19th Century Bonaventure Cemetery drawing By Harry Fenn showing what was then the Warsaw River in the distance. Made from a Jerome Wilson Photo