On average, almost 1000 cars a day drive into Bonaventure Cemetery. And largely the 1993 phenomenon of the novel, Midnight In The Garden of Good and Evil made it so. Love it or hate it, there’s no changing that. But even for those who disparate the fact, and at times with good reason, know that what got them in the door might be the book, but after that, Bonaventure does all of the rest on its own and gets the greater credit. It didn’t hurt the place too badly either in the 19th century when naturalist John Muir slept for a week in Bonaventure in 1857, writing Camping Among The Tombs, later inspiring Oscar Wilde to do similarly for two nights, praising the place, “Incomparable.” 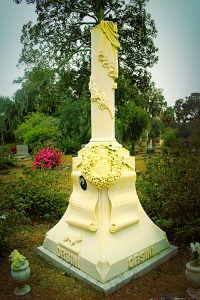 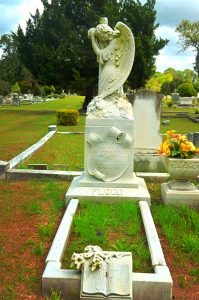 Flood family “Rock of Ages” statue in Savannah’s Catholic Cemetery by Antonio Aliffi. The sculptor’s daughter Grace was the model. This is the ONLY known signed monument by Aliffi in Savannah.

Even so, I wonder how many carriages, barges or train depot clients made a journey into Bonaventure in the sculptural heyday when the place was made famed as an international outdoor art museum by two sculptors who were great individually and then for around a 12 year period, as partners of sorts, John Walz and Antonio Aliffi. While it was a romantic place from the landscape observations of poets and writers before them, it would be the hours after Walz landed here in 1889 with “Little Gracie,” and then Antonio Aliffi in 1910, that set the stage for the likes of “The Book” as Savannahians call it. Together they’d add over 200 monuments to Bonaventure alone never mind all of the other cemeteries nearby. Walz had previously unveiled The Silenced Drums of Gettysburg on the battlefield for The Pennsylvania 106th Infantry before coming to Savannah. Antonio Aliffi came from distinguished sculptors on The Isle of Siracusa and came here in search of The American Dream for himself. He worked on Mount Rushmore, Stone Mountain, The Lucas Theater and many other homes, public buildings and monuments. They both did really. Walz works extending even to Bulgaria. I will publish more about these gentlemen in the months to come as they’re much to say, but know this, there’d be NO Bonaventure in the way that we think of it now, nor would I have a daily tour gig without the names WALZ & ALIFFI. Its that simple. They were the only academy trained sculptors that ever lived and breathed in Savannah and produced at levels that they did.

So you can imagine what an honor it was for me when arriving for a Private Tour, and discovering that artist and art teacher, Carmela Aliffi was aboard along with family and fellow creatives like iconic Savannah painter, Betsy Cain, author-journalist, Jane Fishman and then tour organizer, David Kaminsky long time owner of Savannah Color. Tagging along were some extended family from Miami & David’s doggo Jasper.

The pressure was on! But in some sense Carmella, David, Betsy and Jane were old acquaintances and that made me somewhat at ease as I really hoped to show Carmela how we honored her grandfather as well as father, the son of the sculptor, Antonio W. Aliffi on our Bonaventure Cemetery Journeys’ Tours and naturally learn something from her same time. We toured the old Greenwich Cemetery grounds first finally making our way around to the grave of Sebastiano Orsini and family. He and 6 brothers worked in the grocery business and ran The Savannah Macaroni Company. Generally monuments of important civic people were a matter of discussion between family, church leaders and sculptor. I shared my interpretation of The Broken Column half draped by The Curtain of Life, the meaning of the scrolls and possible lion carving as symbolizing symbolic of God’s protection. Carmela who knew some of the people now buried there, including a grandson who’d just passed at 100 years of age, noted that Orsini may have been a member of The Order of The Sons of Italy In America as The Lion was part of the main emblem. She noted with some humor that the wife, Salvatrice Orsini was the 2nd wife and the sister of his first wife. And that when he proposed to her, she reluctantly agreed but needed him to know that she would wear black for the rest of her life — and she did! Incidentally, Carmela owns a gold painted plaster cast of a larger version of this lion carved by her grandfather. 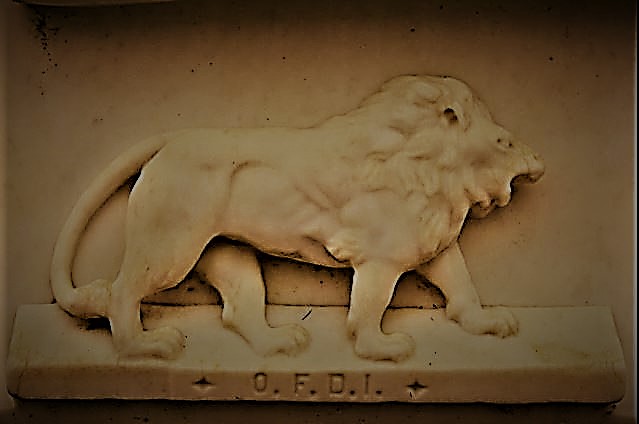 Later we took the group photo at the plot of Carmela’s parents, Antonio & Virginia. Her mother, is still living at 94 and according to Carmela is a “true redhead.” Now and again I’ve met her mother sitting on the winged lion bench in the plot where Carmella is sitting for the photograph. Her father, one of the sculptor’s nine sons, passed away in 2002. He was a passionate singer, charity volunteer and in the appliance business for 25 years. When I looked at the photo later I admit I gushed with some happiness and got a bit teary eyed for how special of a day it had been and that I’d been privy to it. I even flattered myself a bit to think one day long after my own life’s end, the photo will be admired with special appreciation for all of the meaning of such a gathering of thinkers, artists and creative people and with a sculptor’s spirit watching over. 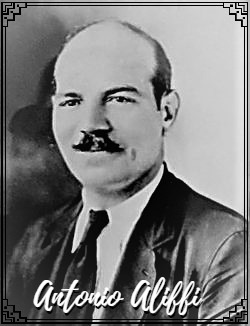